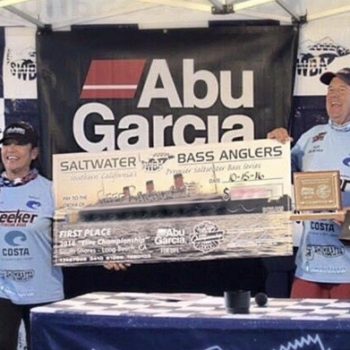 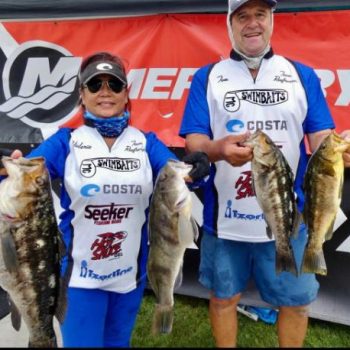 Tom and Valerie Handzus have been fishing together since 1990. This duo met fishing on a blind date and married seven years later. Together they’ve made countless trips to Baja Mexico – catching everything from striped and blue marlin, to sailfish, dorado and yellowfin tuna – from their own trailered boat. They’ve also been on countless offshore trips catching albacore, bluefin tuna, yellowfin, black sea bass, thresher and mako sharks, and more. They’ve also fished Alaskan waters, adding salmon and halibut to their catches.

For the past 15 years Valerie and Tom’s primary focus has been fishing saltwater bass tournaments in Southern California. Their long list of accomplishments includes regularly placing within the top 25 percent of the field and making the cut to the tournament championships at the end of each season.

Tom and Valerie were fishing Seeker Rods long before becoming Pro Staffers. Their arsenal of rods includes both offshore and inshore, but their favorite rods – and what they use in tournaments – are the Inshore Pro and Blue Lighting Series. Valerie also enjoys using her several pink Athena Series rods.

Saltwater Bass Anglers (SWBA)
Six events per year ending with a 2-day Championship event at the end of the season.

~ First Place at the 2016 Championships (Pictured)

Six events per year ending with a 2-day Championship at the end of the season qualifying for the Championships each year.

Approximately 150 competing teams. For the past 10 Valerie and Tom have been fishing this event, winning Third Place multiple times and managing to stay in the top 10% of the field each year and qualifying to advance to the King of the Bay Tournament of Champions.

Annual Olive Crest Foundation Fishing Tournament
Valerie is on the Planning Committee for the event which raises over $200,000 to $300,00 annually for at-risk children. This is done by taking professionals from the food industry fishing for making a donation to participate in the tournament with appointed captains and their boats.

FIBer’s Christian Fishing Club
Members since 1991 and participate in most club events including chartered offshore fishing trips and fishing tournaments.  In the past, Tom developed and managed their Youth Program and arranged for funding (private/Friends of Rollo) of fishing trips for FIBer’s junior anglers as well as for Olive Crest Home special needs kids on local sports fishing boats.

Members for approx. 13 years. Many of the scuba divers did not fish so Tom and Valerie were voted in as the club’s Fishing Directors to excite members about fishing by organizing a fishing tournament every summer for a perpetual club trophy and occasionally teach fishing seminars at meetings.

Valerie Handzus – Retired from the City of Anaheim as a Buyer after 10 years of service.  Was a former nationally traveled musician/entertainer singing and playing bass and guitar. She performed with various show groups and had her own show for a few years. Her resume includes performing on television; at theme parks such as Knott’s Berry Farm, Showcase Theatre at Magic Mountain; Caesars Palace in Lake Tahoe and some of the finest resorts throughout the U.S. and Canada.

Tom and Valerie are honored to also be pro staff for the following: