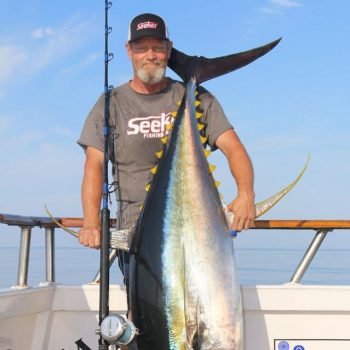 Seasoned vet of the Southern California fishing scene Fred Brant has made a name for himself as a dedicated Seeker ambassador. He began fishing Seeker nearly 30 years ago and has decades of catch highlights to brag about.

Fred got ‘hooked’ on fishing at an early age, taking his first trip to Anacapa Island aboard the Estrella at only seven years old. It’s been in his blood ever since. From the waters of Anacapa to Fred’s go-to destination Cedros Island, Fred has hooked everything from Mahi, swordfish, and tuna offshore; to sailfish, snapper, grouper, wahoo, and more inshore. His first tuna came in 1984 at Anacapa aboard the Gentleman.

Among Fred’s trophy catches was a 63 lb. Yellowtail on a Sabre 540 at Santa Barbara Island in 1993. His focus changes season to season, but the last several years he’s found the most success throwing surface iron at Yellowtail from a panga at Cedros Island.